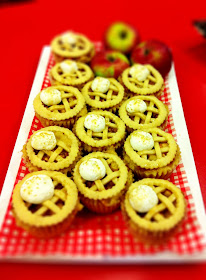 Making cupcakes are fun, making them and winning cupcake wars at work is even more fun! This recipe also won me a gold ticket on the Food Network Show, Recipe to Riches. You can make it easier on yourself by preparing the apple filling and the sugar cookie dough a day ahead.  This recipe is a combination of a spongy vanilla base, with a cinnamon apple topping and is crowned with a cinnamon sugar encrusted sugar cookie that is made to look like a pie top. Start with the cookie dough since it needs a minimum of 2 – 4 hours to chill, followed by the apple pie filling which also should be allowed to cool. Only make the cupcake batter when these two are ready. 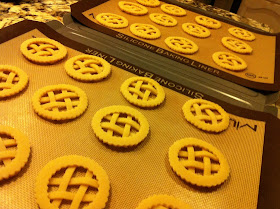 Sugar Cookie ‘Pie Crust’
Cream the butter and sugar together. Add the egg. Add the vanilla. Add the flour a spoonfull at a time making sure to scrape at intervals. Cover the dough with cling wrap and refrigerate for 2-4 hrs. When cooled sprinkle with flour and roll out. The trick is to use flour while rolling and keep the dough cool. Cut circles out of the cookie dough and also cut srips with a pasta roller or using a knife and ruler. Brush the circe with egg white and then fasten the strips in a criss cross fashion. Make sure the dough is cooled again before you flip it over. Preheat the oven to 350 degress. Brush the top of the cupcake with egg white and dredge in the cinnamon sugar mixture. Bake for 15 mins so the cookie is almost fully baked. Remove and cool. These can be made ahead and frozen.
Apple Filling
Heat the butter in a medium skillet over medium-high heat. Add the chopped apples and sprinkle with sugar and cinnamon. Add the lemon zest. Cover for a few minutes. Since this is going back onto the cupcake, we don’t want to overcook it. Cool. 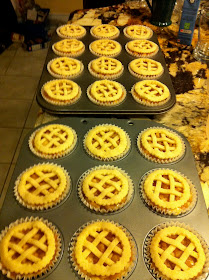 Cupcake base
Preheat oven to 350°F. Sift together the flour, baking powder and salt. Cream the butter and sugar till light and fluffy. Beat the eggs in one at a time scraping after every addition. Add the dry ingredients alternating with milk.
Now comes the fun part!
Fill the jumbo cupcake cases with a tablespoon of the batter and place a half teaspoon of the apple filling over the batter. Then cover with two teaspoons of batter. Your cases should be about ¾ filled. Reserve about a half cup of the batter. Bake for about 10-15 mins. Brush or pipe on the backs of the cookie tops with some of the left over cake batter. This will help secure the top to the filling. When the cupcake base is about halfway done at 10 – 15 mins, remove from the oven, quickly spread the filling and add the cookie tops. Bake for another 10 – 15 mins. 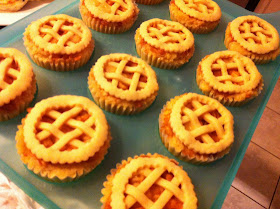